A world without the internet is nearly impossible to imagine. The internet connects us to information, resources, and each other, and has a profound impact on the way we live our lives. Globally, more than 4.57 billion people are active internet users, and that figure grows each and every day.

As technology evolves, the ways in which people access the internet are rapidly shifting. What started as a network connecting almost exclusively desktop computers to the world wide web has quickly evolved into a mobile-dominated network. Today, internet-connected devices include everything from laptops to tablets to smartphones, and in the developed world, even vehicles and refrigerators.

As of 2020, here is the global breakdown of internet traffic:

For those reading this article on a desktop computer, this information may surprise you. But looking at it from a global perspective, the numbers make sense. The biggest factor driving mobile’s dominance globally is the affordability of mobile devices and smartphones. 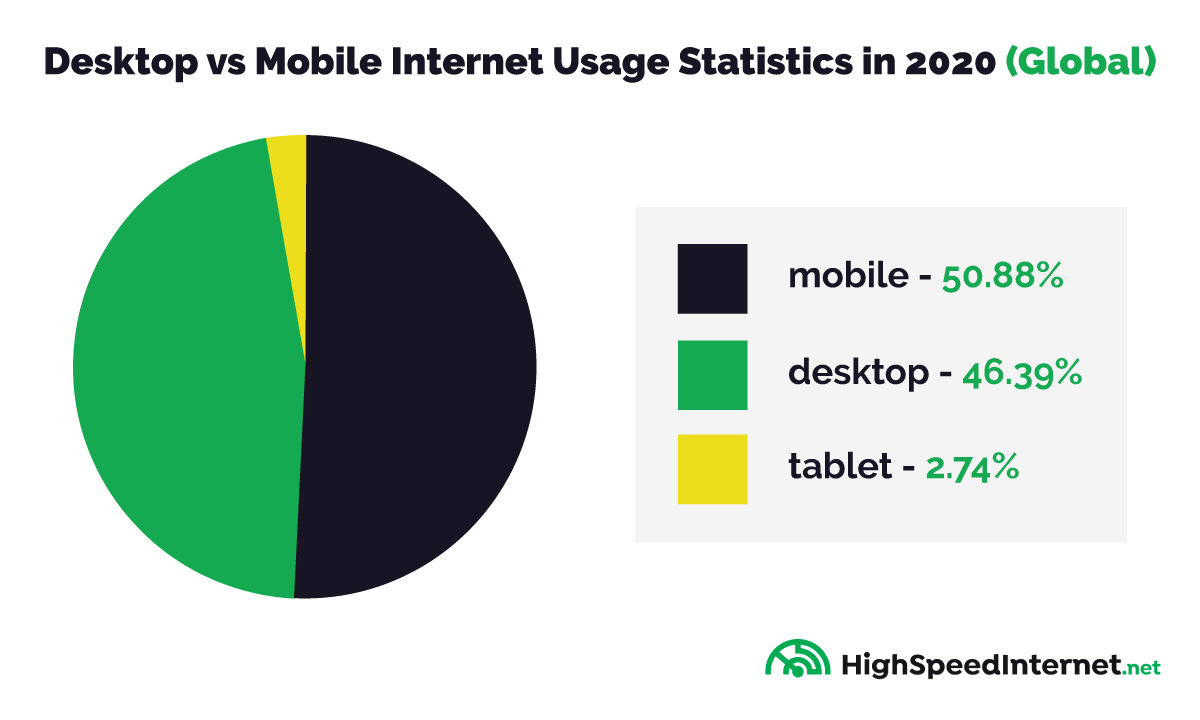 Lower-income individuals can often afford a basic smartphone and mobile internet access, but can’t necessarily afford a desktop or laptop computer. This is particularly true in emerging economies, where cheap mobile devices are plentiful.

Home internet, or WiFi, is another factor. In the developed world, we may think of “the internet” as having an internet-connected device hooked up to a WiFi network. However, globally, a huge percentage of people access the internet exclusively via their mobile phone network. The latest statistics indicate that only 1.145 billion households have a wired home broadband subscription, compared to the 4.57 billion global internet users.

If we zoom in on just the United States, the data looks a bit different. In the US, desktop traffic accounts for approximately 49.58% of all web usage.

Here is the breakdown of internet usage statistics in the United States:

Several factors contribute to desktop internet usage stats in the United States. For one, it’s a relatively wealthy country, where most households own desktop or laptop computers. US Census data from 2016 indicated that approximately 77% of US households owned a laptop or desktop computer, and that figure is likely higher today. 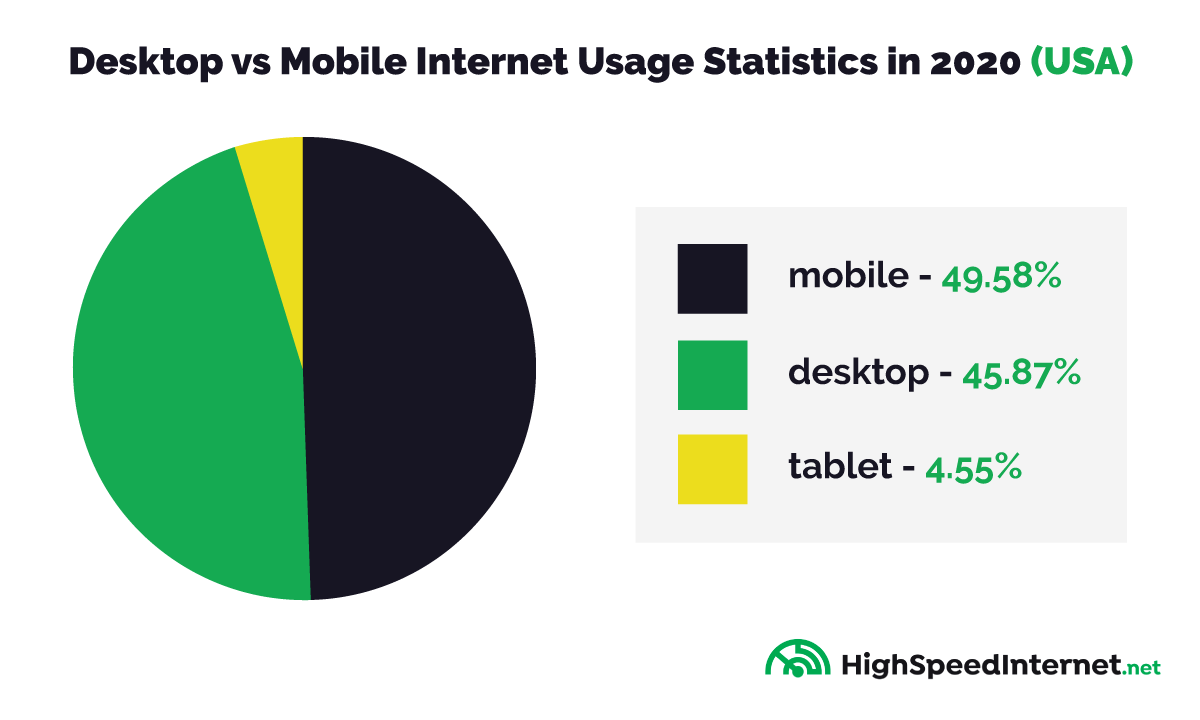 What’s fascinating to think about is just how fast the internet has shifted from almost exclusively desktop-driven to mostly mobile-driven. Just a decade ago, in 2010, over 97% of all global web traffic came from desktop computers. Today, that figure is just 46%. The first time that mobile overtook desktop in terms of total market share was back in 2016.

Several factors contributed to this rapid shift. Most notably, the rise of the smartphone has completely changed the landscape. In the developed world, the vast majority of adults own smartphones. In the United States, for example, over 81% of citizens are smartphone users, according to Pew Research data from 2019. The introduction of smartphones has made it easier for people to access the internet whenever they want, and wherever they are.

In the developing world, smartphones have had an even bigger impact on mobile internet usage. Around 45% of individuals in emerging economies own or have access to a smartphone. The percentage of mobile users in the developing world is growing rapidly, and mobile usage is a primary driver in spreading internet access to the global population. Internet-connected mobile devices provide an accessible, affordable way to access the web in emerging economies.

The shift from desktop to mobile has forced businesses and organizations to make significant changes. 10 years ago, the common advice was that every business needed a website. Now, having a mobile site, or at least mobile-friendly web pages, is essential.

Of course, the type of activities that internet users engage in on mobile is notably different than typical internet activities that are performed on desktop computers. Global data on the subject is sparse, but here’s a breakdown of data in the United States:

Online gaming remains exceedingly popular on both desktop PC and mobile devices. Statistics are difficult to measure across so many different platforms and categories, but we can gain some insight from the data available.

From all this data, we can glean some significant insights into the current state of internet usage, and perhaps even the future outlook for the World Wide Web.