Viewers Binge 4,422 minutes of The Office Amid Pandemic

‘The Office’ remains one of the most-watched shows on Netflix. During the pandemic, the fanbase of this popular show, which ended back in 2013, has gained an even bigger following.

During the pandemic, viewers watched:

Before the pandemic, viewers watched:

Viewers could watch about 10 episodes of ‘The Office’ a day and finish all nine seasons in just 18 days.

Truthfully, people could finish the series even faster. Once viewers find a show they like, it’s not uncommon to focus on that show alone. If that were the case and a viewer watched ‘The Office’ for eight hours a day, all nine seasons would be complete in just nine days.

Pre-COVID, a viewer would watch roughly 4 episodes of ‘The Office’ a day and would take 54 days to watch all nine seasons. 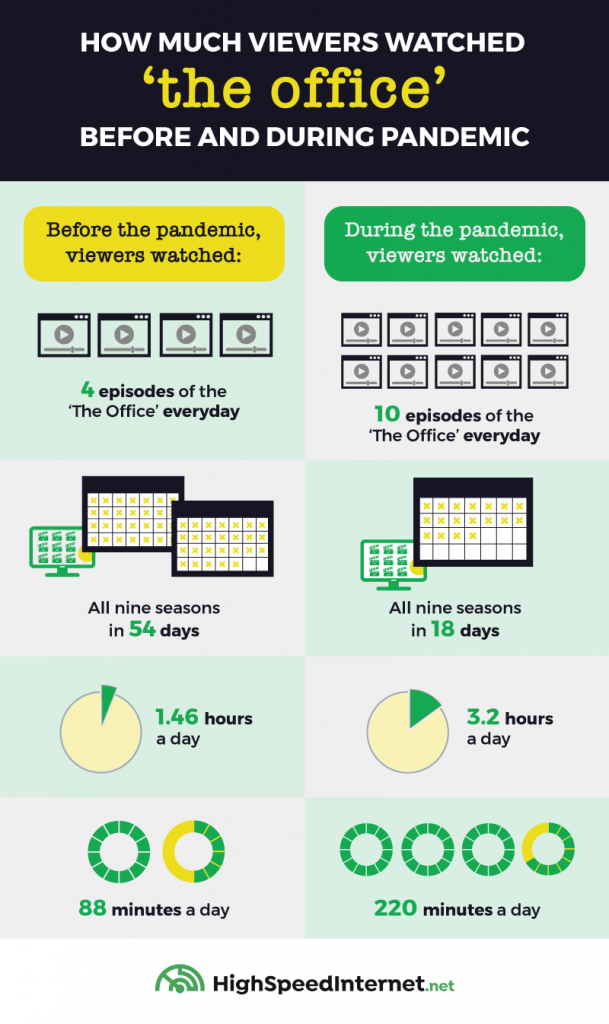 How does this consumption rate compare to life before COVID?

Netflix keeps a lid on many of its statistics, but research shows people are streaming an estimated eight hours of TV a day during the pandemic and divide their attention between two or three shows, according to Tubi.

Before the pandemic, people consumed an estimated 2.7 hours of TV, compared to the 8 hours they’re watching now.

Closer to home, Netflix registers 69.9 million users here in the U.S. with an estimated 7% of them watching ‘The Office’. That means 4.83 million people have become Dunder Mifflin fans.

How COVID has changed streaming

COVID has created a perfect storm for increased binge-watching. People are staying in more and refraining from group activities, which puts streaming shows like ‘The Office’ at the top of everyone’s to-do list.

Across the globe, streaming usage is on the rise. Worldwide, 51% of people said they were consuming more shows on streaming channels, but media consumption varies by country. Take a look at the chart below. 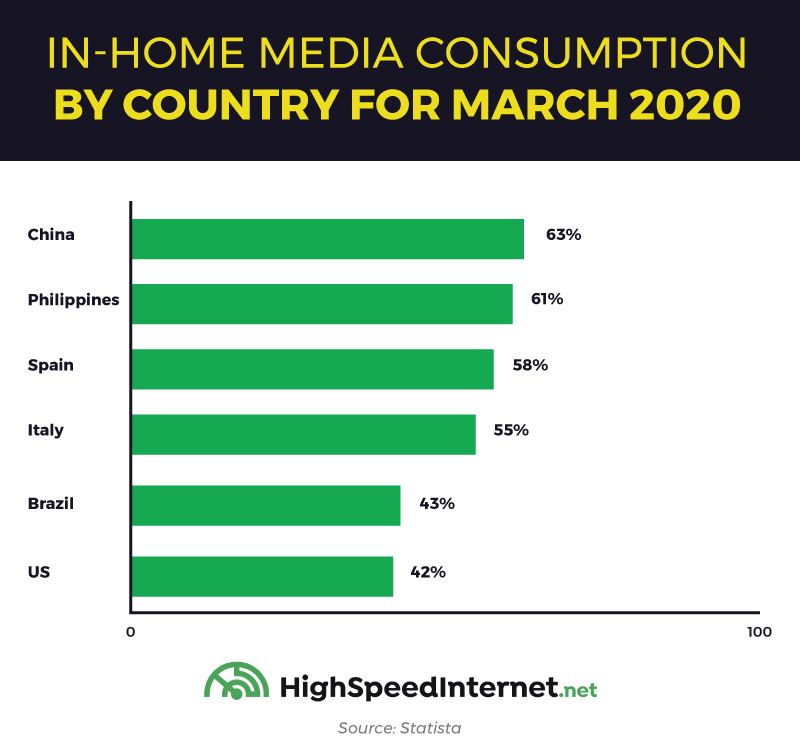 The research shows 42% of Americans are streaming more TV, but that’s far less than the 63% of Chinese residents who say they’re relying more on streaming services. American viewers ranked sixth in Statista’s global rankings of in-home media consumption in March 2020, out of 13 countries profiled.

Streaming increases in the U.S.

Research that focuses on the U.S., shows just how important streaming has become during the pandemic. Americans are streaming enough TV to consume an entire workday. Take a look at the streaming statistics below from Tubi.

Why has streaming consumption increased so dramatically?

The most obvious reason for streaming subscription rates to climb is because the virus forced everyone indoors. Many government leaders issued lockdowns that kept people at home to flatten the curve of the pandemic.

However, many places are re-opening, yet streaming services are still in high demand. Why? Here’s a look at some reasons:

While 42% of Americans are watching more news to stay informed about the pandemic, there’s a strong need for levity right now. The serious nature of the virus has many people looking for an escape, and TV provides that outlet.

Just about every major and minor sporting event has been canceled or postponed due to Coronavirus. There’s talk about starting games back up though. The NBA, for example, is talking about returning in mid-summer, and hopes are high that the NFL season will get started at its regular time this fall.

Without any sports to watch, fans are filling the void with other options – like those found on streaming TV channels.

The pandemic created an abrupt end to the school year for students across the world. At the same time, many parents were forced to work from home. As a result, parents are loosening the reins on-screen time in an effort to have uninterrupted work time. Research shows 65% of parents are allowing their kids to watch more TV than usual during the pandemic.

While a growing number of people are hopping on board the streaming bandwagon, it’s not necessarily available to everyone. To stream TV shows like ‘The Office,’ viewers must have a strong, reliable internet connection and fairly fast internet speeds to binge without buffering. The standard speed is 25mbps. (To understand internet speeds, check out this post).

Despite internet access increasing across the U.S., the truth is, geography plays a huge role in a person’s ability to watch the romance between Jim and Pam unfold.

According to FCC data, viewers in the following states have the strongest internet, of at least 25mbps, to support 4K streaming:

The worst states to stream TV are: 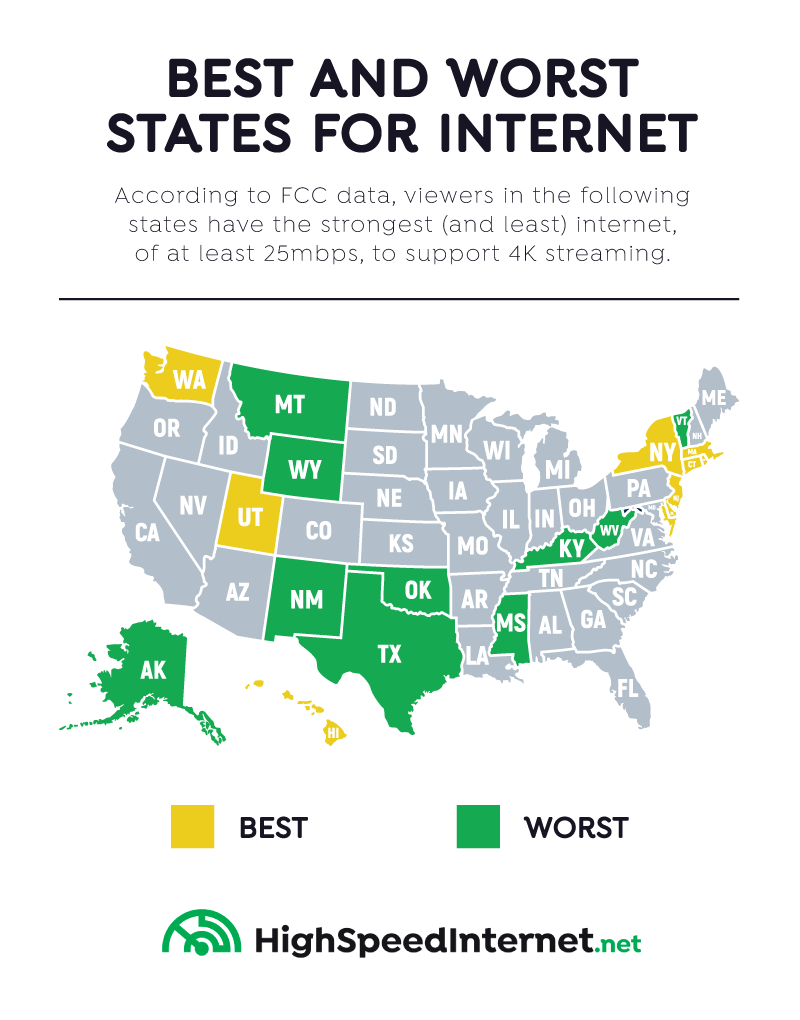